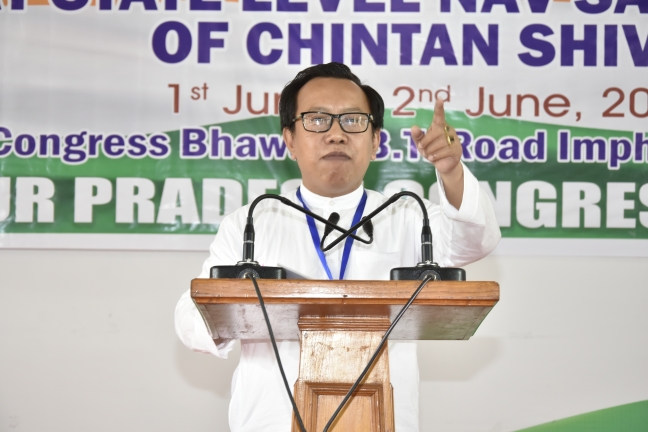 Manipur Pradesh Congress Committee (MPCC) has formed a “Political Affairs Committee ” comprising 16 Congress leaders during the 2-day Nav Sankalp Meeting of Chitan Shivir that began on Wednesday as part of the party’s preparation for the 2024 Lok Sabha Election.

Addressing the media at Congress Bhawan on Thursday, MPCC senior spokesperson Ningombam Bhupenda Meitei said that as a part of the initiative taken up by the All India Congress Committee (AICC) to gear up for the 2024 Lok Sabha Election, the party conducted the two-day Nav Sankalp Meeting from Wednesday onwards. In line with the decision taken by AICC during Udaipur Nav Sankalp held on May 13 and May 15, MPCC also formed a “Political Affairs Committee” as a resolution of a two days meeting, the leader informed.

Bhupendra informed that some of the Congress leaders to lead the committee are MPCC president K Meghachandra; CLP leader O Ibobi Singh, a regular member of the Congress Working Committee, AICC Gaikhangam, deputy CLP leaders K Ranjit Singh and others.

He further informed that various other agendas were resolved during a brainstorming session that was held as preparation for the 2024 Lok Sabha election, viz. finalization of jurisdiction and constitution of Mandal Congress Committees, to conduct a 75 Km long padayatra starting from August 9, 2022, to mark the celebration of 75 years of India’s Independence by every District Congress Committee (DCC), plan to fill up the vacant Mandal, Block, district and state-level positions in the next 90 to 180 days by November 15, agitation program on price rise, unemployment, and other issues.

Commenting about Enforcement Directorate (ED) issuing summons against Congress leader Sonia Gandhi and Rahul Gandhi in connection with a money laundering case, Bhupenda said that the Congress party is geared up to reinvigorate itself and return to power after the 2024 Lok Sabha Election. Seeing all these activities of the Congress, fear psychosis is being developed within the BJP government, the spokesperson said, alleging that as a reaction to it, the Enforcement Directorate issued summons to Sonia Gandhi and Rahul Gandhi.

“Sending summons to Sonia Gandhi and Rahul Gandhi is a complete political vendetta,” he alleged. 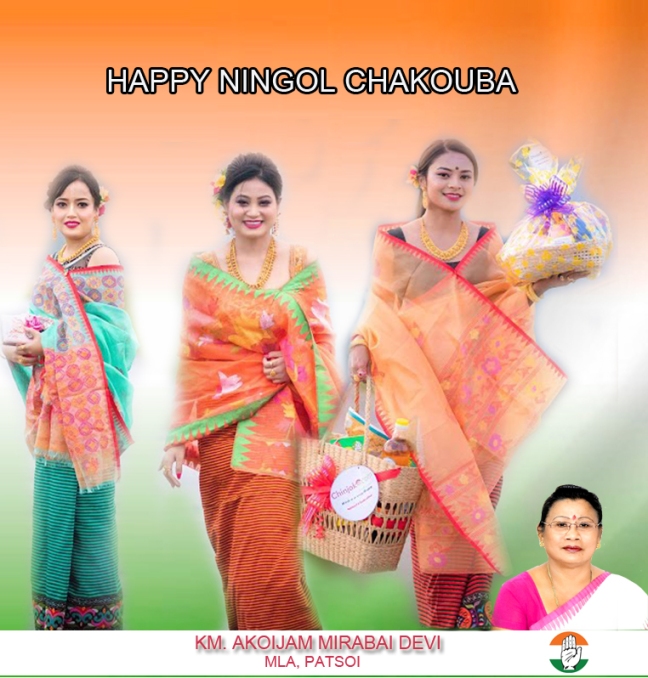 Ningol Chakouba,One of the greatest festival of Manipur celebrated widely in the state. Km. Akoijam Mirabai Devi, MLA Patsoi A/C greets to the people of Manipur. She writes

“Greetings to the people in the state on the occasion of #NingolChakouba, hoping to strengthen the bond of love among the brothers and sisters, daughters and parents of a family.

Although the festival is originally observed by the Meitei community, the celebration now extends to other communities in Manipur emphasising the importance of happiness and reunion of a family in bringing peace and harmony in society,

May this festival foster the true spirit of love, goodwill and compassion in our society.”

On the occasion, Shah Nawazkhan, Secretary, Manipur Pradesh Congress Committee greets to the people of Manipur specially women of Manipur. 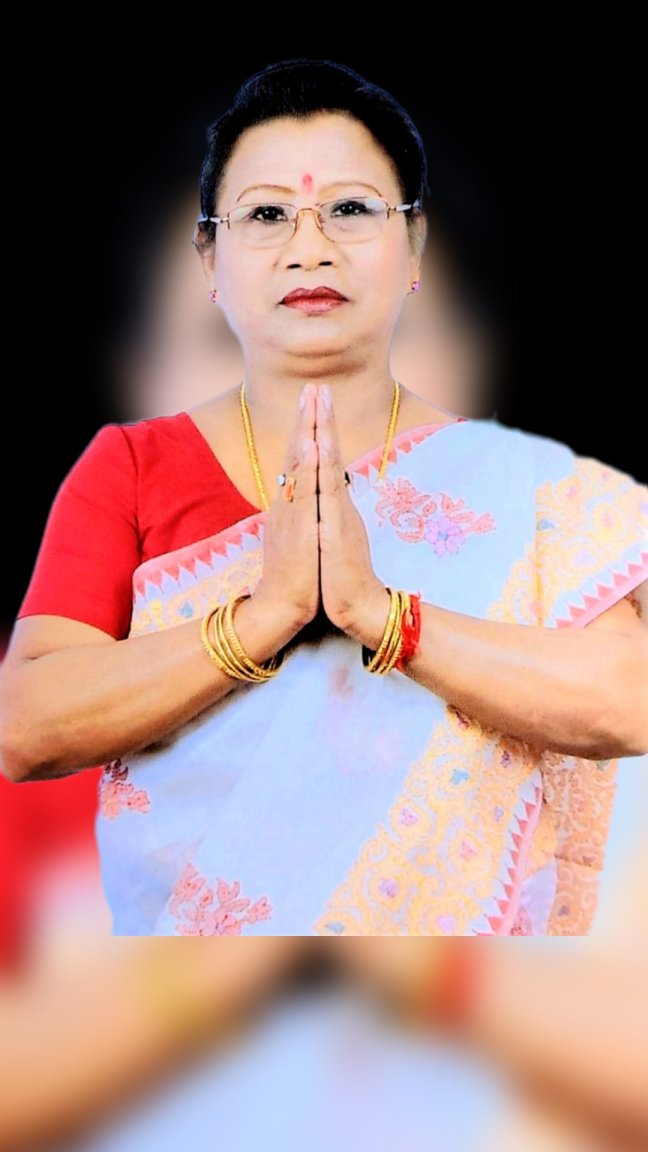 In the function, She feted 1000 COVID-19 warriors by presenting certificate of honour and simple “Lengyan Phi”. Cash awards also given to the Doctors,para medical staff, Asha workers and volunteers. A luncheon programme also organised in connection with the function. 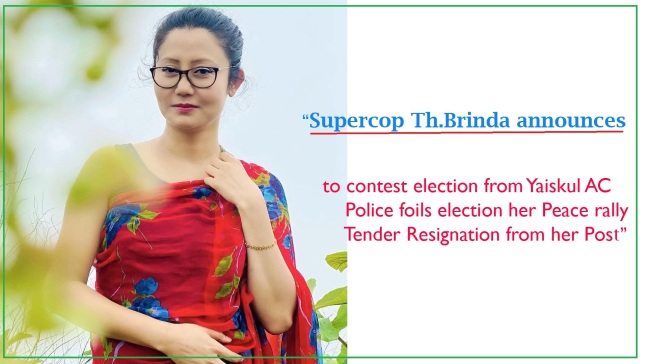 to contest election from Yaiskul AC

to contest election from Yaiskul AC

In the brief, Bupenda Meitei stated that the Congress party joined in extending solidarity to the 24 hours bandh called from midnight of today till tomorrow’s midnight for Justice to (Late) Athuan Abonmai. He also stated that as per the advice of AICC Senior Observer (Manipur) Jairam Ramesh, MP, and AICC in-charge (Manipur) Bhakta Charan Das, ex-MP, and MPCC state leadership, the party had decided to close the office and cancel all the official meetings which were scheduled to be held in the said duration for the upcoming elections in the state.

The Manipur Pradesh Congress Committee today demanded the institution of Judicial Inquiry on by not less than a sitting High Court Judge, within 24 hours to the assassination of social activist Athuan Abonmei who was abducted in broad daylight amidst security arrangement from Pologround of Tamenglong district headquarter and later found killed in the evening around 30 km from the spot.

Late Athuan Abonmei, a fearless outspoken activist and a critic of NSCN-IM was waiting for Chief Minister N. Biren Singh and his cabinet colleague to attend the “Go-To-Hill 2.0” mission when he was abducted by some gunmen suspected to be cadres of the NSCN-IM. Working President of the MPCC I. Hemochandra while condemning such killing asked the government where are the law and order. He said that a civilian was abducted by gunmen from a place where the chief minister of Manipur was attending a state function. When a civilian can be abducted from a well-guarded place, then where is the security of the general public. Hemochandra not only question the security of the general public but asked the security of the Chief Minister himself as it happened from the place where he has been attending. “When gunmen can enter and abducted civilian from the place where the Chief Minister is attending then it compromises the security of the Chief Minister Himself too”, former Minister Hemochandra said adding that there needs an immediate independent judicial inquiry into the incident. He said this as the incident itself is a clear example of security lapses that needed to be investigated at the earliest.

Another working President of MPCC K Meghachandra, who is also the Spokesperson of the MPCC said that police officer and other security forces present at the ground should take sole responsibility for the killing of Athuan Abonmei. Both the working president said that the assassination of Athuan Abonmai, the voice of the unity and integrity of Manipur, must be taken with utmost seriousness as the martyrdom of Athuan Abonmai can’t go into insignificant history. Meghachandra added that the Congress party salutes the fearless voice of Athuan Abonmai. His loss is the historic loss for the entire Manipur. He said Congress demands that DM and SP of the district concerned must be sacked within 24 hours, and both should be held responsible for the loss of Abonmai’s life. The Congress also demanded that the DGP of Manipur must explain what has led to the failure of non-responsiveness to the FIR lodged by Abonmai’s son at Lamphel Police Station, why and how the police and district administration could not prevent the abduction of Abonmai in a broad daylight from a government event in full public glare.

The MPCC considers that the broad-daylight assassination of Abonmai is a ground reflection of the total failure of the Home Department, CID, Crime Branch, and State Intelligence Bureau in the state, Working president of MPCC I Hemochandra said. He added that the incident of such brutality and inhumanity has never ever taken place in history to silence a democratic and fearless voice that always stood for the uncompromising unity and integrity of Manipur. The MPCC spokespersons further said that bullets can’t silence the true sons and daughters of Manipur. Many Abonmais will be born to follow the philosophy and ideology of martyred Athuan Abonmai. Congress said that the entire state government of Manipur has completely failed to protect the precious life of our true son of Manipur and our beloved brother, Athuan Abonmai.

This is a copy and pastes from the publication of Imphal Times Daily, Links given below:

Mirabai Chanu ended India’s 21-year wait for a weightlifting medal at the Olympics by clinching a silver medal in the 49kg category to open the country’s account on Saturday. The 26-year-old lifted a total of 202kg (87kg+115kg) to better Karnam Malleswari’s bronze in the 2000 Sydney Olympics.

Shri Govindas Konthoujam, MLA Bishnupur AC congratulates her on a Facebook post as “You’ve made all of us proud, On your super achievement, Your hard work has surely paid off, And luck and destiny too, So keep smiling as you made it through, Super Congrats to You!

Pulitzer prize-winning Indian photojournalist Danish Siddiqui was on Thursday night killed in Afghanistan’s Kandahar while reporting the war situation in the conflict-ridden country.

Afghanistan’s Ambassador to India confirmed the news on Friday.

Siddique, a journalist in his early 40s working with news agency Reuters, was embedded with Afghan Special Forces and had been reporting the operations against the Taliban.